This isn’t paintball; it’s airsoft. And you aren’t on a battlefield in Afghanistan; you’re in Hangar 37 in Gran Canaria. 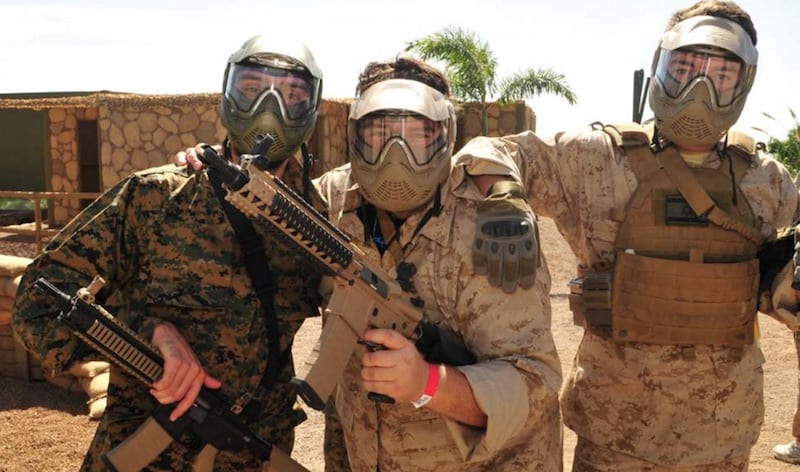 Have fun playing airsoft in a realistic scenario. Go alone, with friends or with your partner and play against each other or against other players who will have come to join the fun. 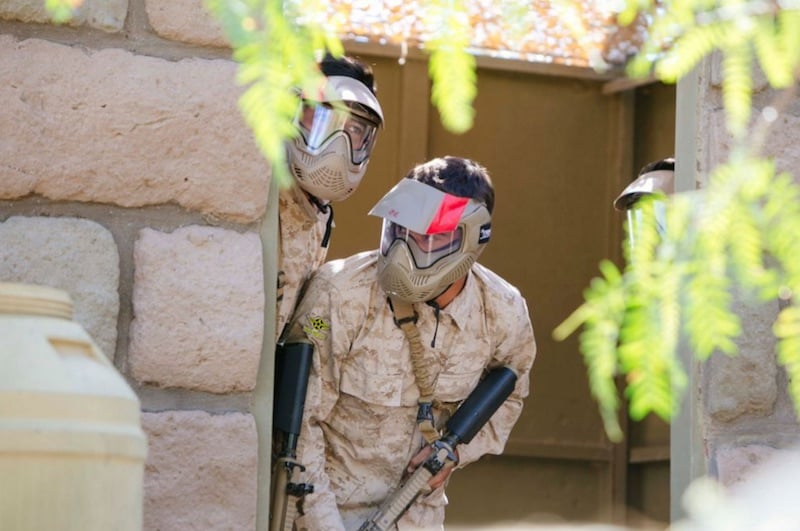 Your age is not important, and neither is your gender, just your desire to have a good time shooting at your enemies. 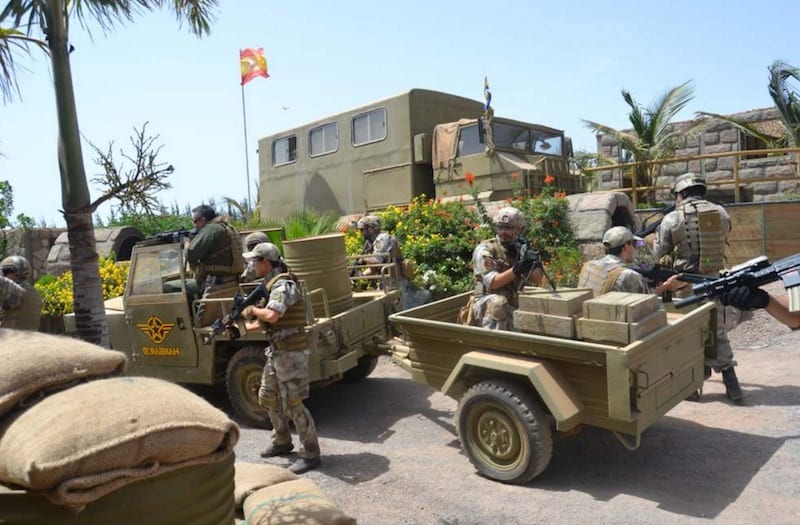 Unlike paintball, the balls do not leave stains, do little damage and are more accurate. In addition, the paintball scenarios are very simple in comparison to Hangar 37, which is the largest airsoft battlefield in Europe at over 4,000 square feet. It has the capacity to host 80 players simultaneously, divided into two teams. 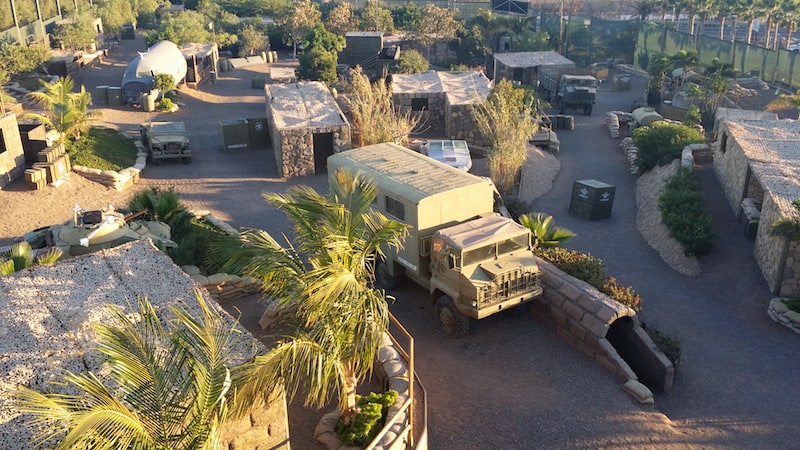 And they aren’t models, they’re real. Use them to shield yourself from your opponents. 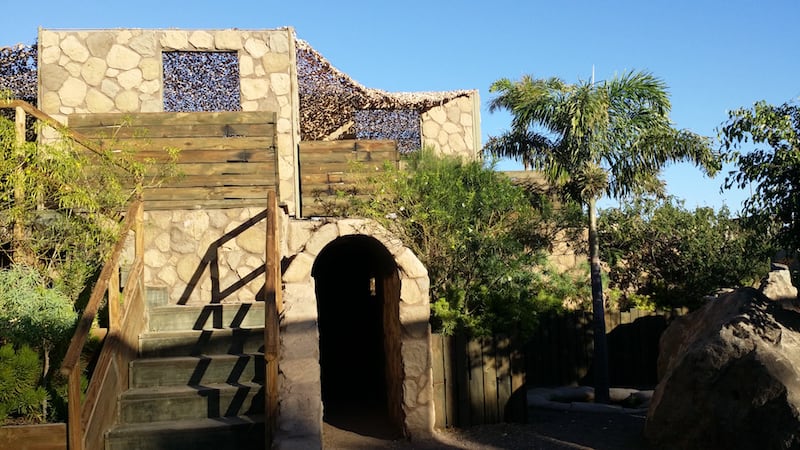 Become the protagonist of your own battle. You’re not in your living room watching a war film or playing Call of Duty. Now you’re playing real games, in which either your team wins or your rivals win, or they eliminate you or your shots hit them. 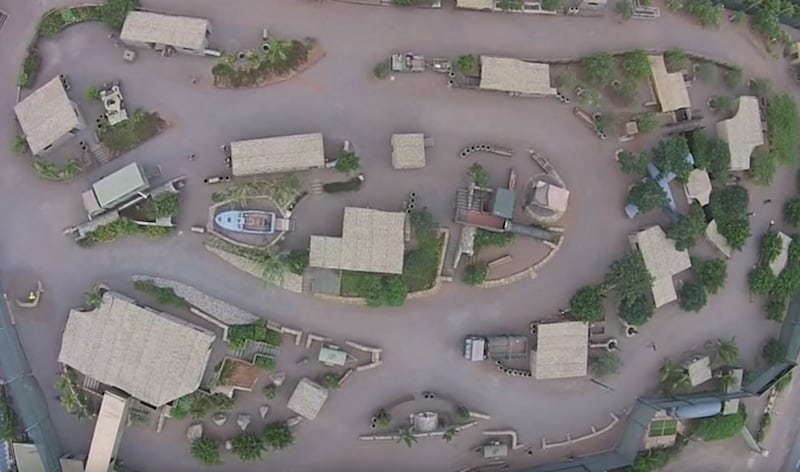 Excitement, fun, camaraderie and plenty of adrenaline will be part of every battle.

It’s crucial to work as a team since you only have 10 minutes (the duration of each battle) for you and your team to win. 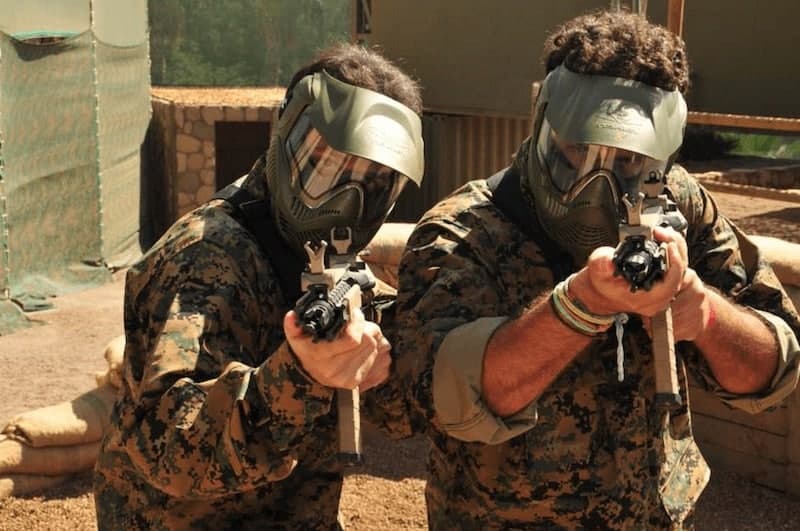 You’ll set out to play equipped with battle fatigues, a vest, a mask, a G&G replica of an AK47 and ammunition of 360 balls, although you can buy more ammunition if you wish. You don’t pay per game, only for ammunition, so you will be able to play many games as long as your supply of ammunition lasts. 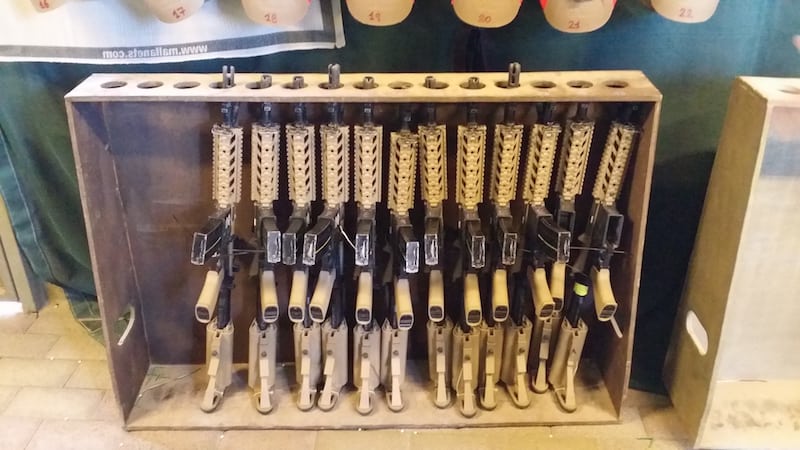 You don’t have to play all of the games that follow. You can rest in the rest area or get something to drink at the restaurant bar until you regain your strength.

If you don’t know about Hangar 37, you have to come, and if you come, you’ll want to return.

Great day. Worth the effort for the scenery alone but then the games were so fun. The price was phenomenal. Well worth it.

Impressive. The setting is incredible and the games really fun

The best way to de-stress. I went with my wife and a group of friends and we loved it, It’s really fun and high adrenaline.

The highlight of my holiday. I went with a friend and we joined in with the games with other people there. We had the best day of our holidays

3 times in one week. I was on holiday in Gran Canaria and we went to try what the airsoft was like. We didn’t only go once, we had such a great time that we went 3 times until our holiday ended.

The best activity in Gran Canaria. My hotel recommended it to me and although it was far away, it was well worth it. We went back twice mroe before leaving Gran Canaria.

Incredible. The scenery is spectacular and the games are really entertaining. Worth doing more than once.

Perfecto plan for friends. We went in a group of 10 friends (girls and guys) and we found it so fun. We will go back soon.

Suprising. I thought it would be the typical paintball type of place but it was craziness. There was even a tank! Very fun.

I will go back for more. The place is incredible and the games really fun and well organized. As soon as I can, I will return.

Addictive. I went twice during my holidays in Gran Canaria and I will go back for another Gran Canaria holiday next year so I can go back and play there again.

Highly recommended. The organization, countryside battle ground and games were excellent. 10 out of 10.

Unforgettable day. I played 10 games and I had such a good time. The place is incredible and everything was well organized.

Fantastic. Much better than paintball and to top it off, the place is stunning, feels like you are in a real battle.

Fun and exciting. The scenery is spectacular and the games are exciting. Great place to pump adrenaline

Anti-stress. I went with some work colleagues and we finished as good as new. Highly recommended to de-stress

100% Adrenaline. The best activity to get the adrenaline going. The setting is fantastic and the games, really fun and well organized.

Perfect for adrenaline. I celebrated my birthday there with my friends and the games and scenery were amazing. Very de-stressing.

Really fun. I went with three couples and with my husband and we had so much fun. More the women than their husbands! It’s great.

Great plan to go with friends. Hangar 37 is amazing with every last detail take care of. The games were really fun and a lot of adrenaline was burnt.

Really good. I went with some friends thinking that I wouldn’t like it and that it was a boy thing but I was so mistaken. It was really fun and I loved it.

Super fun. I went with my kids of 13 and 15 years old for their birthdays and all three of us want to go back. I think I enjoyed it more than them.

Hangar 37  is located 10 minutes away from Playa del Ingles and Maspalomas.

You can  reach us by  car, taxi or public bus-transport.

You can play unlimited games as long as you have ammunition.

What is the age limit to play?
Ages 16 and up play adult games, but there are special games for children between 12 and 16 years on Saturdays and Sundays. Children less than 12 years old can also enjoy shooting in the firing range.

Can my friends come along if they don’t want to play?
Yes. There is a bar / restaurant where your companions can get something to drink while you play.

How many friends have to go in order to play?
You can come on your own and join teams to take part in the battles.

As the playing field is so large, the games should have a minimum of 5 players per team in order to be entertaining and successful.

What is the maximum number of players for each team?
Up to 80 people can play simultaneously, divided into 2 teams.

Do the shots hurt?
Barely. You will be sufficiently covered by the uniform, vest and mask so that the impact is very mild, and unlike paintball, it will rarely leave a bruise.

Is it recommended for women?
Yes, 25% of the players are women and they have as much fun as the men.

Can I go only to shoot?
Yes, Hangar 37 has a firing range so that you can practice your aim.

Other users have also viewed and booked:

Realize an excursion guided by an instructor, admire the coastline with huge cliffs and stunning sea caves, arriving at unspoiled beaches, difficult to reach without these vehicles.

Transport yourself to the Wild West and feel like a cowboy in an unforgettable adventure in a real Western city and Have fun with our shows.

Our site uses cookies to give you the very best experience. Continued use of our site tells us that you're agreeing to the way we use cookies. Read more about cookie usage here..Ok Seguir leyendo | Read more

This website uses cookies to improve your experience while you navigate through the website. Out of these, the cookies that are categorized as necessary are stored on your browser as they are essential for the working of basic functionalities of the website. We also use third-party cookies that help us analyze and understand how you use this website. These cookies will be stored in your browser only with your consent. You also have the option to opt-out of these cookies. But opting out of some of these cookies may affect your browsing experience.
Necessary Always Enabled
Necessary cookies are absolutely essential for the website to function properly. This category only includes cookies that ensures basic functionalities and security features of the website. These cookies do not store any personal information.
Non-necessary
Any cookies that may not be particularly necessary for the website to function and is used specifically to collect user personal data via analytics, ads, other embedded contents are termed as non-necessary cookies. It is mandatory to procure user consent prior to running these cookies on your website.
SAVE & ACCEPT