What to see in Gran Canaria

Of the hundreds of places to go in Gran Canaria, we offer you the most iconic 20 places and monuments on the island, and even tell you how to get there and why you should visit them.

20 places you must see and visit in Gran Canaria

Known as “Little Venice” thanks to its canals, this city nestled in an old fishing town is one of Gran Canaria’s most visited places. Walk along its quiet streets, lined with white-faced two-story houses with colorful flowers on their balconies. 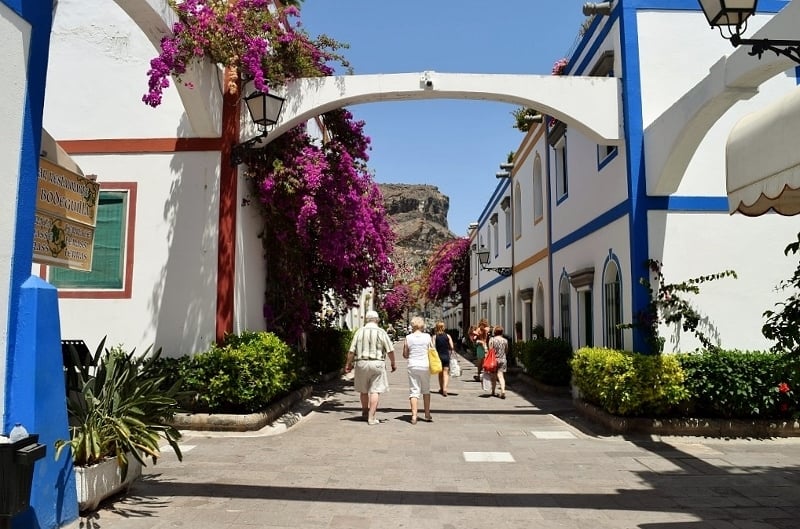 Enjoy its beach, tour its sports pier or eat something at one of the numerous restaurants. 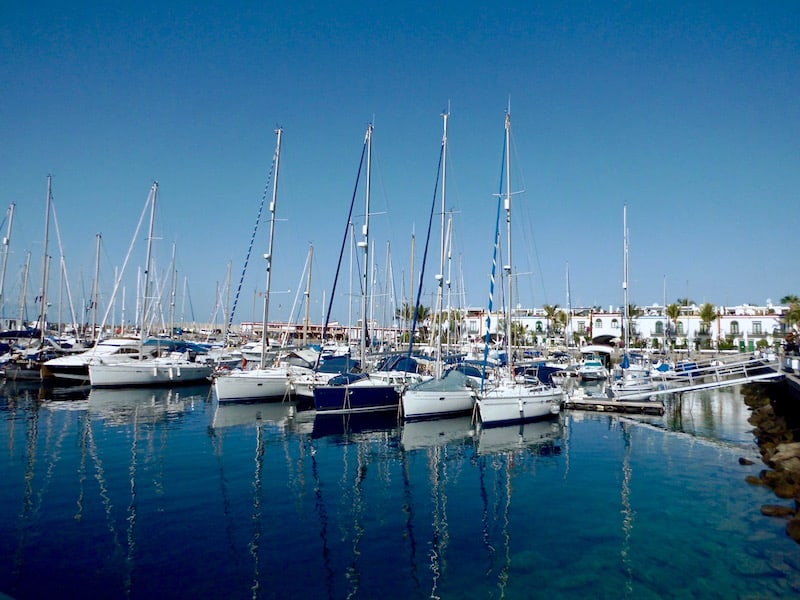 If you come on a Friday, you can also explore its popular market.

Don’t forget that you can experience a unique adventure from Puerto de Mogán: going 20 metres under the sea in a yellow submarine. 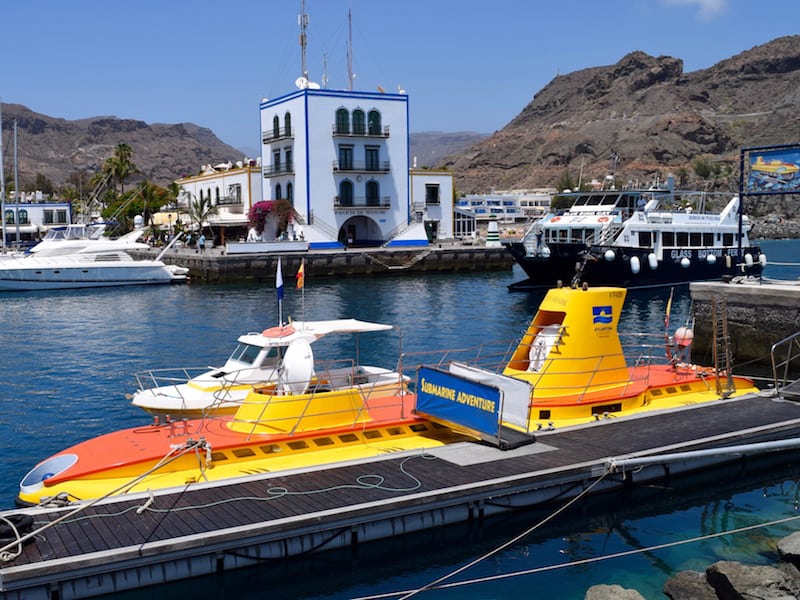 Without a doubt, the landscape formed by the dunes of Maspalomas is the island’s most representative and iconic. Its 400 hectares of dunes, which can be over 10 metres high and stretch to the banks of Maspalomas Beach, make this place one of Gran Canaria’s most photographed. 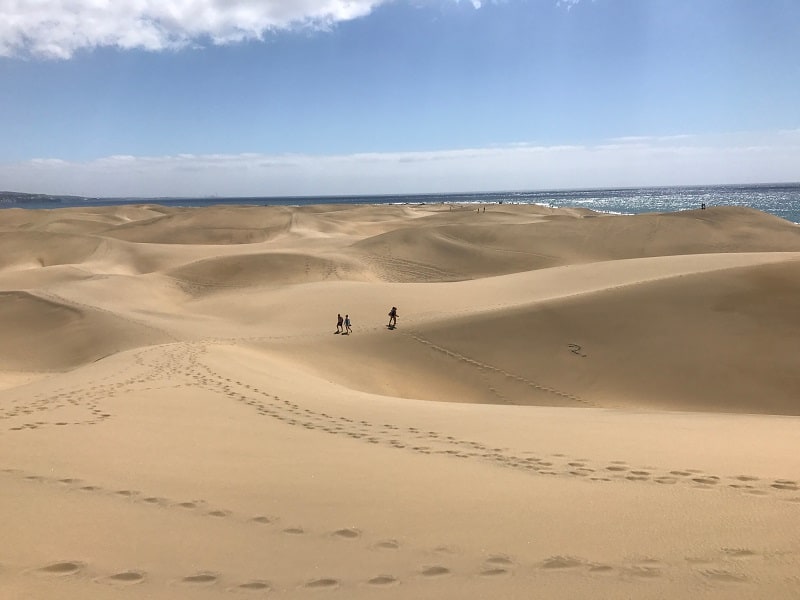 The best place to contemplate the immensity of this natural space is the Lookout near the Riu Palace Maspalomas hotel.

If you want to feel like a nomad, we recommend you do one of Gran Canaria’s most popular activities and go on a camel ride through the Dunes of Maspalomas. 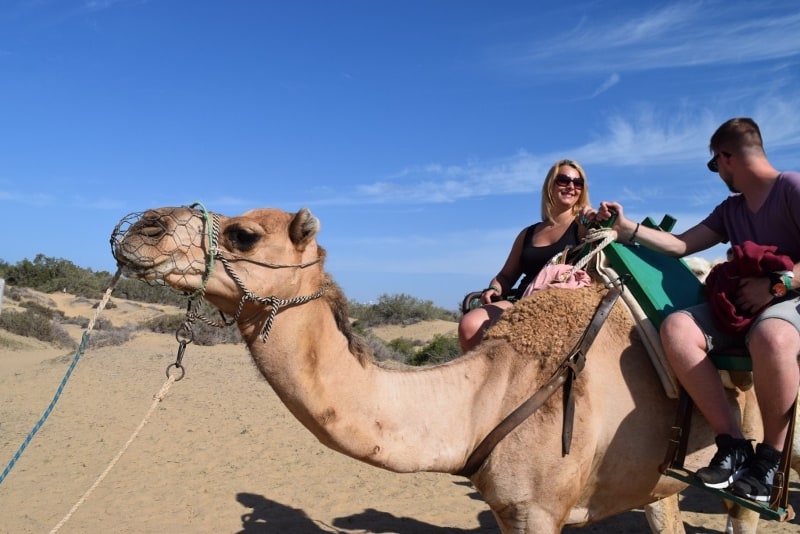 The Maspalomas Lighthouse has been declared a World Heritage Site and is one of the oldest functioning lighthouses on the Canary Islands. It is 60 metres tall and up to 6.2 metres wide, which means it can be seen from almost anywhere on Maspalomas Beach. 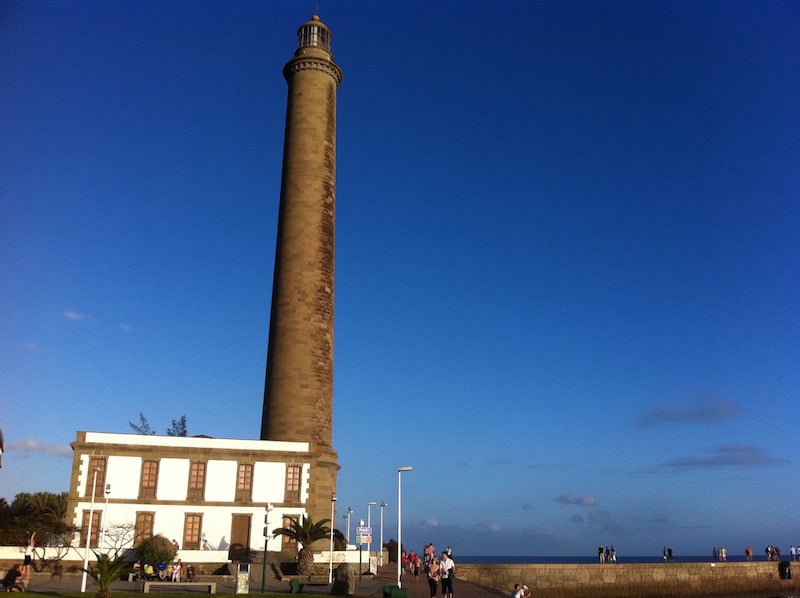 Declared a Natural Monument and a World Heritage Site, the Guayadeque Ravine is one of the island’s most well-known and beautiful canyons. It is 11 kilometres long and its steep walls are hundreds of metres tall. 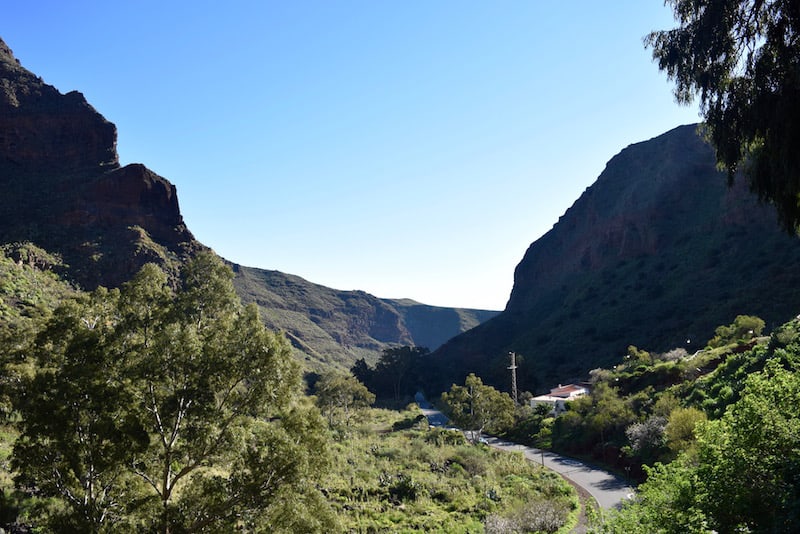 It’s worth visiting some of the cave dwellings that are still inhabited today, as well as sampling something in one of the restaurants serving Canarian or international cuisine. 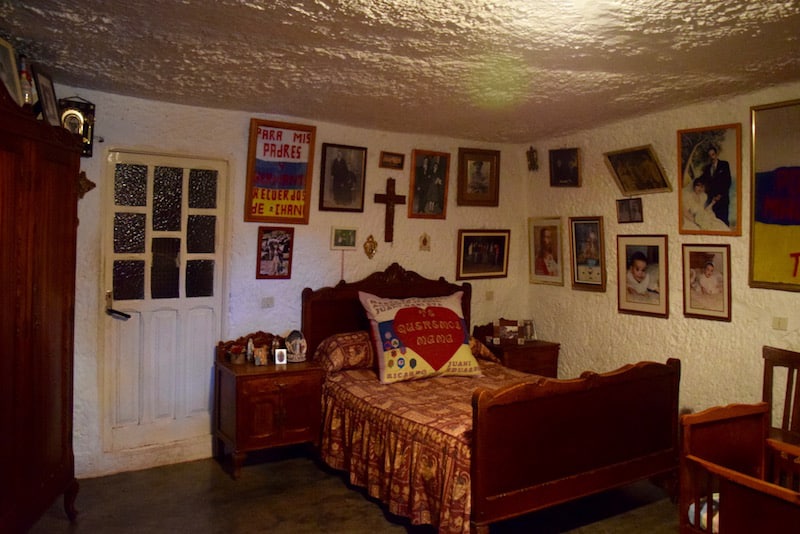 The historic centre of Agüimes is, without a doubt, one of Gran Canaria’s most beautiful. The houses offer the perfect example of the island’s traditional architecture, with stone and lime facades.

Touring its streets, you will see many sculptures adorning them, the most popular of which is the camel. 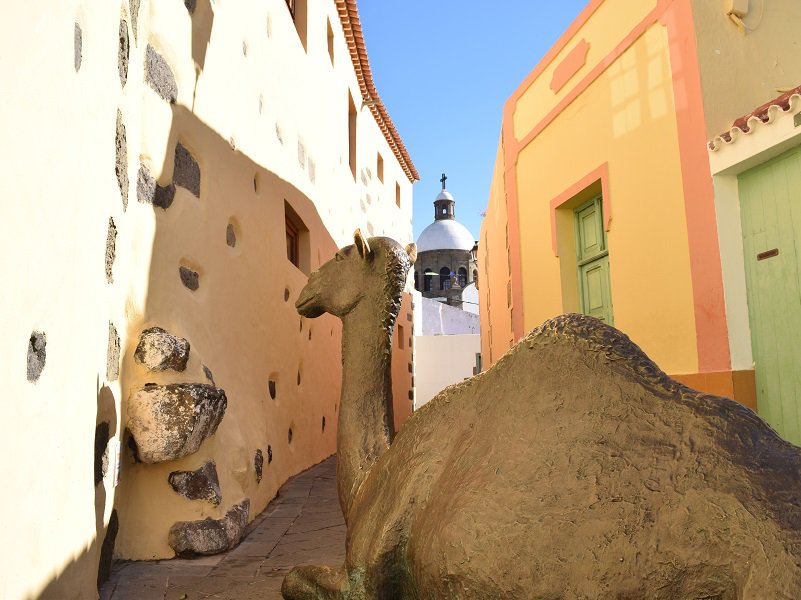 Very close to Maspalomas and Playa del Inglés is a landscape that you can’t miss. It’s one of those hidden treasures that is much closer than you think.

From the Degollada de la Yegua Lookout, you can see a panoramic view of the Fataga ravine, a large canyon 15 metres long and comprised of arid scenery, which is gorgeous at any time of day. 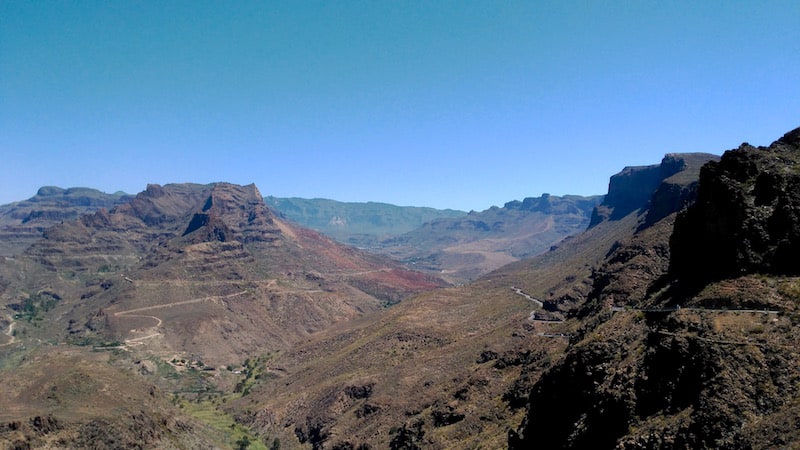 This small town in the island’s southern region is also one of the island’s most beautiful. It is outstanding due to its location in the Fataga Ravine, the beauty of the surrounding palm trees, and the traditional Canary architecture of its homes. Its narrow, steep and cobbled streets are lined with low houses with white facades made of stone that contrast with the wooden windows and doors. 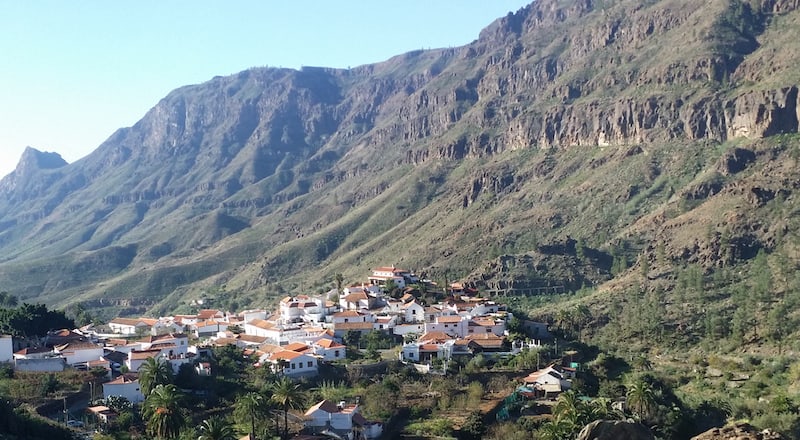 Located in the Fataga Ravine, this area has numerous Canary palm trees (Phoenix canariensis), which make this an oasis in the desert. 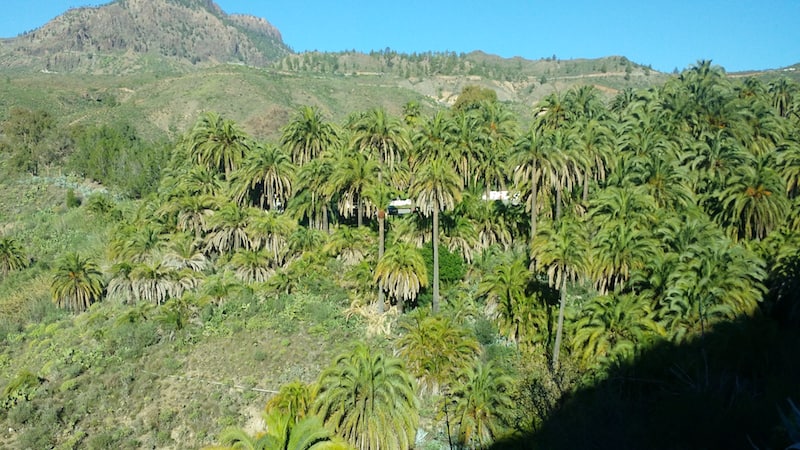 In addition to seeing this valley on our excursions, you can also ride a camel through the Fataga Ravine while enjoying the canyon’s impressive views. 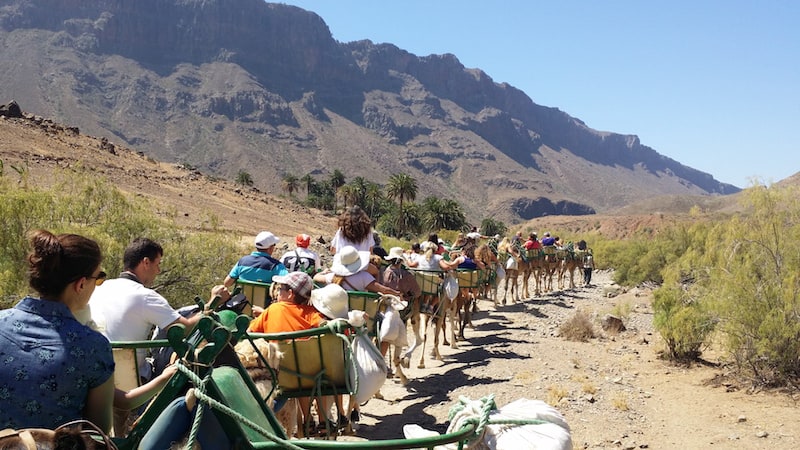 Tejeda is considered one of Spain’s most beautiful villages due to its location and the white facades of its houses, which is typical of the island’s traditional architecture. Located 1050 metres above sea level, Tejeda is in itself a spectacular lookout from which to contemplate Roque Nublo and Roque Bentayga. 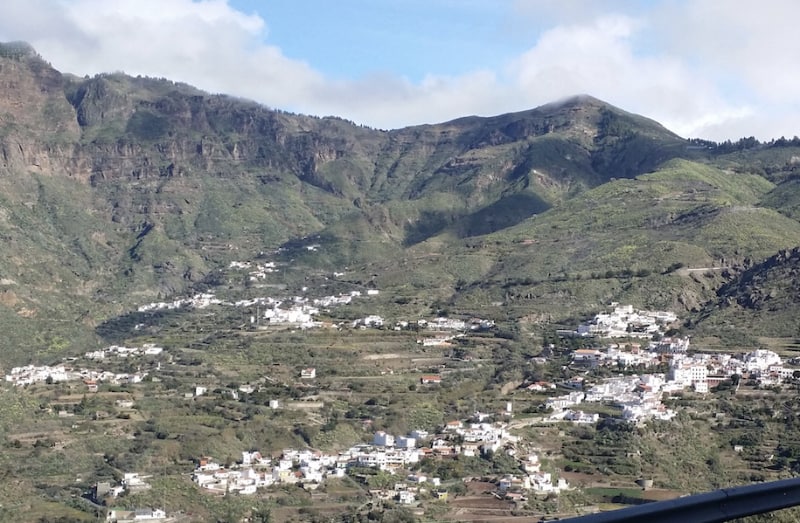 These rocky monoliths in central Gran Canaria are two of the island’s most important natural symbols. Located very close to one another, Roque Nublo (Cloud Rock) is larger at 80 metres tall and a height of 1,813 metres above sea level, while Roque Bentayga reaches 1,414 metres above sea level. 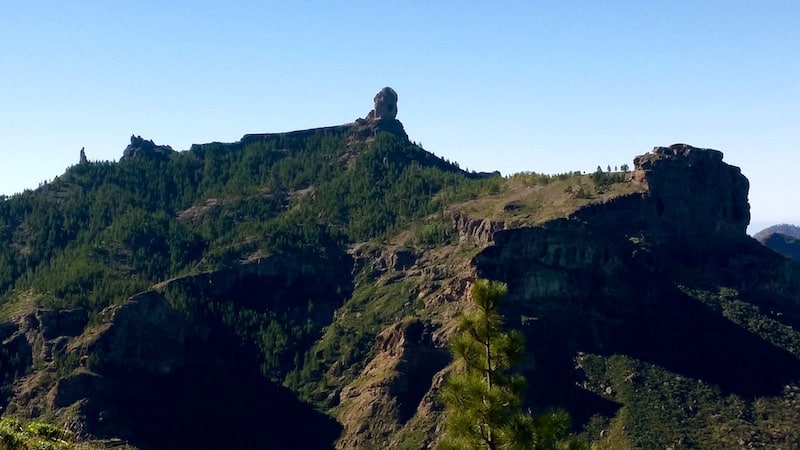 Also known as the Bandama Caldera or the Bandama Volcano, this crater is the island’s largest at over 1,000 metres in diameter and 200 metres deep.

From the nearby lookout, you can contemplate the crater, the coast and some villages toward the north, since it is 569 metres above sea level. 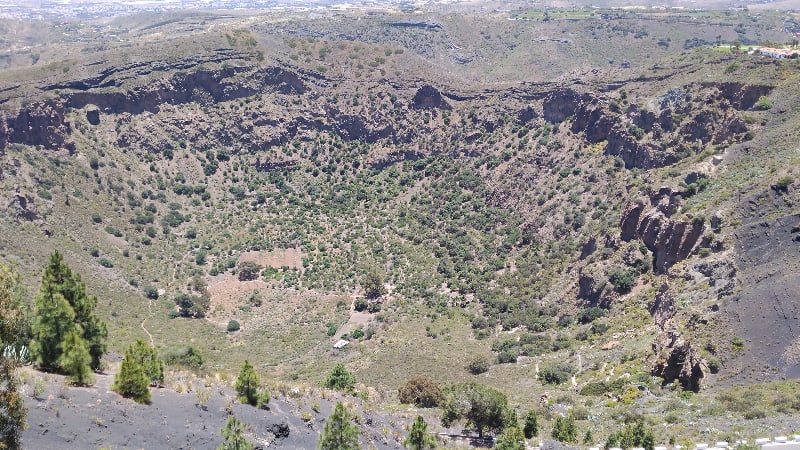 Church of Saint John the Baptist

Located in the historic district of the city of Arucas, this neoclassic church was built between 1909 and 1977. Its impressive facade causes many people to call it the Cathedral of Arucas. 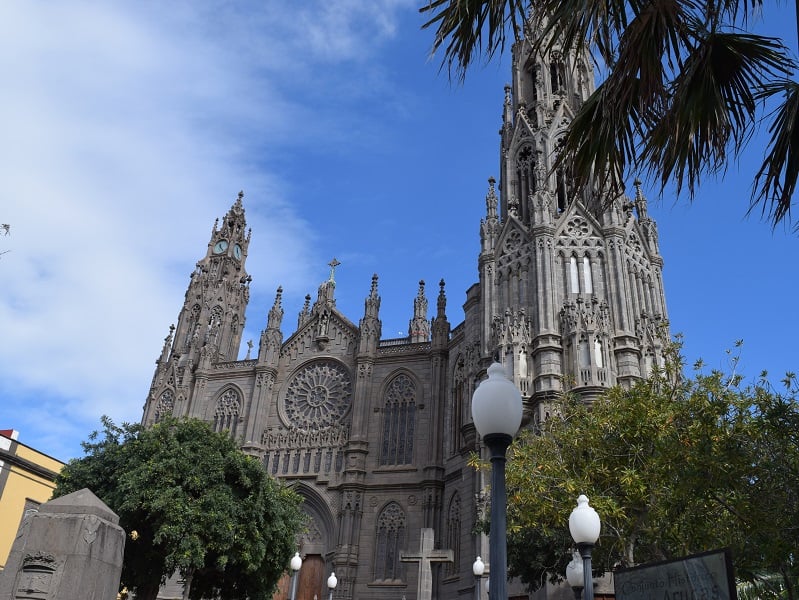 Teror is probably the most-visited town in Gran Canaria due to its charm. The historic centre is known for the facades of its two-story houses in which the wooden balconies really stand out. 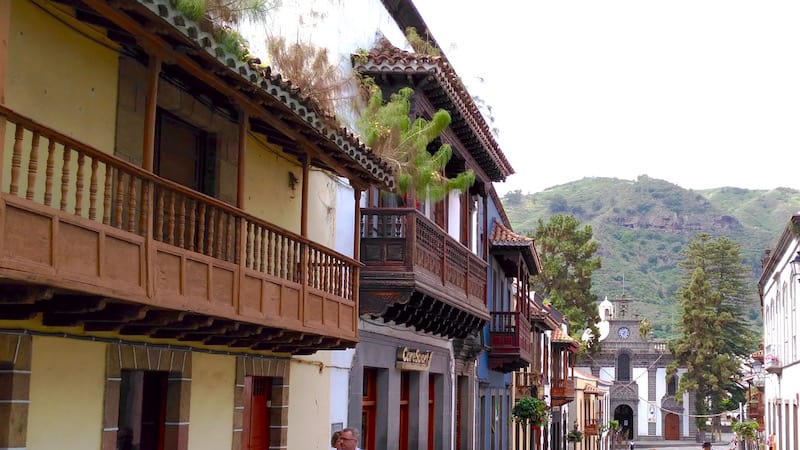 Take advantage of your time in Teror to visit the Basilica of the Pine, one of the most venerated churches on the island. 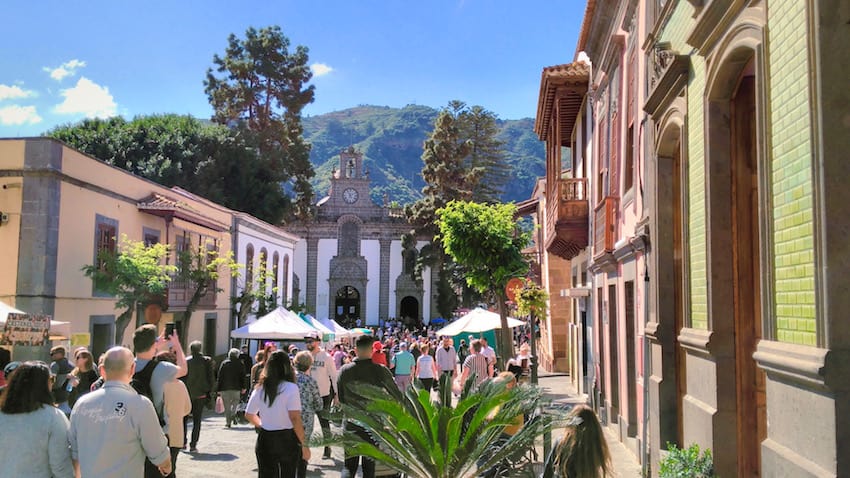 Basilica of Our Lady of the Pine

The Basilica of the Pine is located in the historic district in the village of Teror and was built in the neoclassic and gothic styles.

It is a pilgrimage destination for the inhabitants of Gran Canaria since the island’s patron saint, the Virgin of the Pine, is found here. 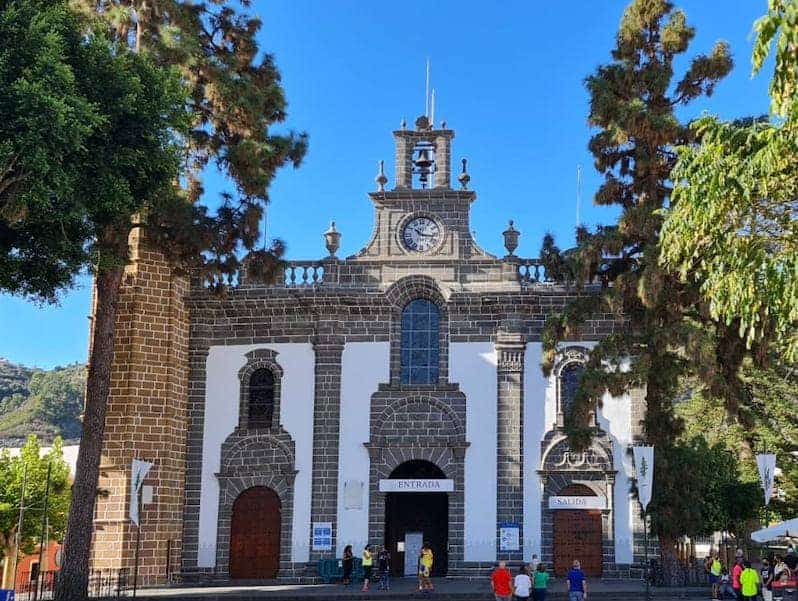 Agaete is the most beautiful fishing village in northern Gran Canaria. It stands out thanks to its peaceful streets, maritime path, beach and wall. If you do an excursion on the island, this is a good place to eat and to sample Canarian cuisine.

Another good reason to visit Agaete is to see its spectacular scenery, in which the cliffs along the coast contrast with the greenery of the valleys in the island’s interior. 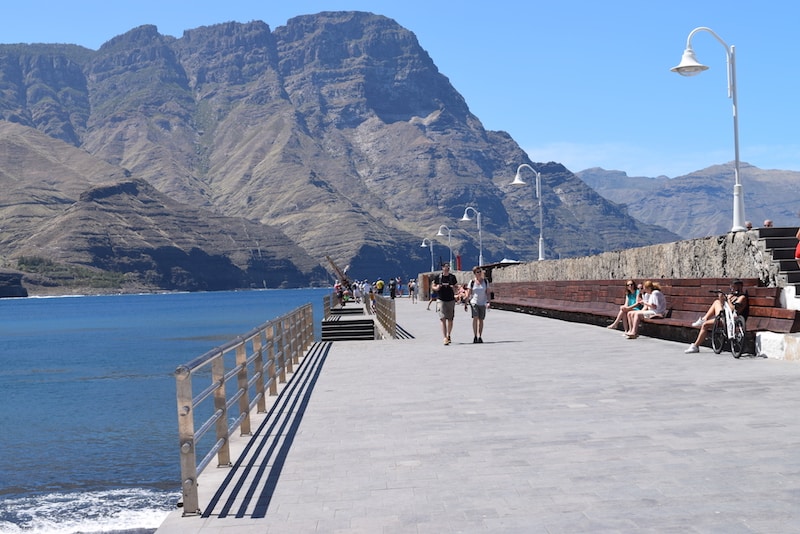 The area known as Los Tilos de Moya is a leafy forest, mainly of laurisilva and lindens, located near the village of Moya.

The scenery in this thick forest contrasts with the landscapes of the grand ravines and arid lands found in the island’s southern region. 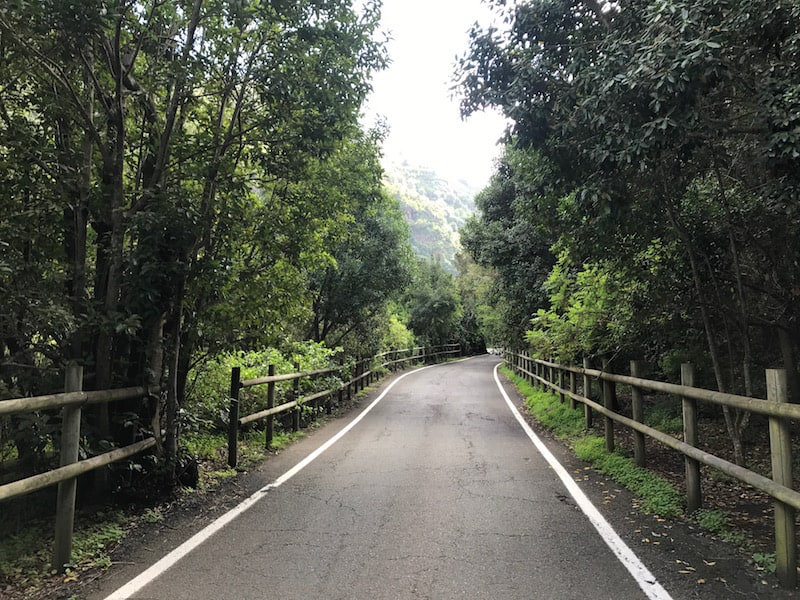 The city of Las Palmas de Gran Canaria is the capital of the island and of the “Las Palmas” province. It is also the most populous city in the Canary Islands. It is worth exploring:

The Vegueta Neighborhood is the city’s historic centre, the seed from which Las Palmas de Gran Canaria flourished. Its origins date back to when the Crown of Castille conquered the island toward the end of the 15th century.

It’s worth walking along its streets and getting to know the Plaza de Santa Ana with the Cathedral,Town Houses, Canary Museum and the Columbus Museum. 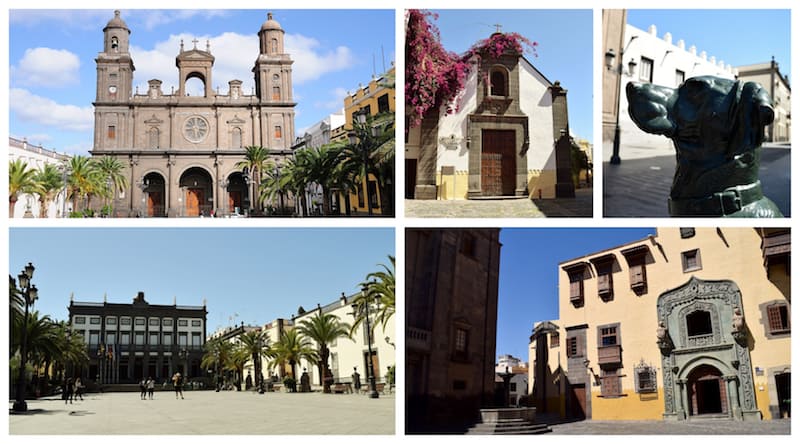 Declared a National Historic-Artistic Monument, the cathedral is the island’s most important church and various styles are mixed in its architecture, especially neoclassic and gothic. 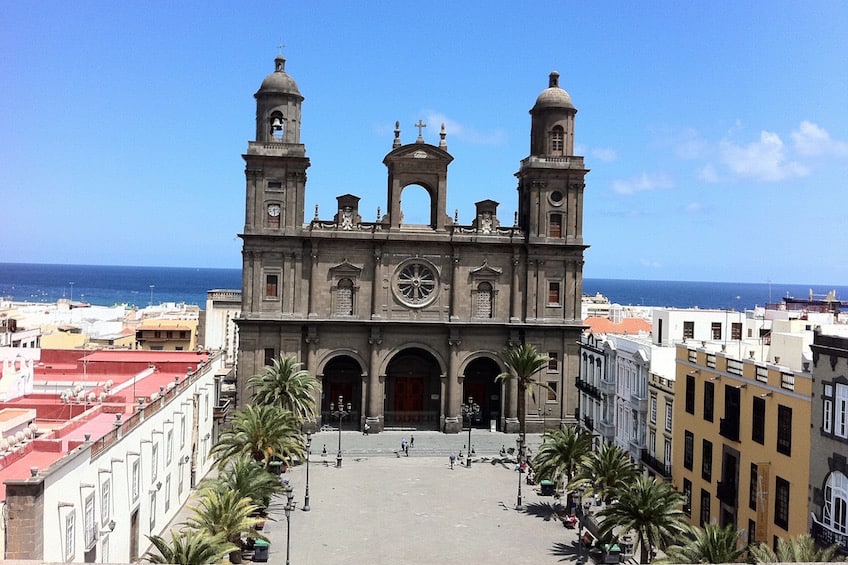 If you decide to go up the bell tower, you will be able to see magnificent views of the Plaza de Santa Ana and the city. 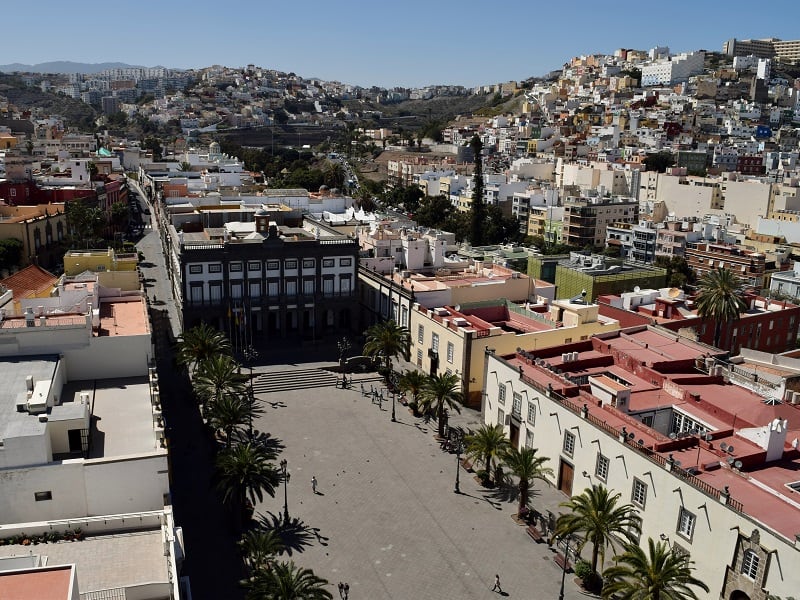 Triana Street, José Mesa Avenue and López Street are the capital’s most important shopping districts. On these streets and their side streets, the biggest clothing, shoe, perfume and jewelry brands can be found, to name a few, in addition to cafes and restaurants where you can eat and drink. 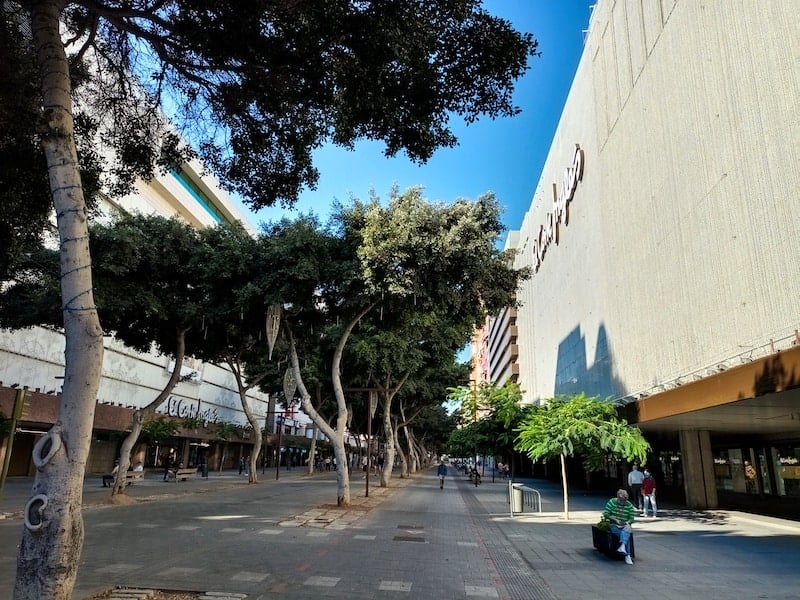 Nestled in an area not often frequented by tourist is a lookout that offers spectacular views of the city of Las Palmas de Gran Canaria. 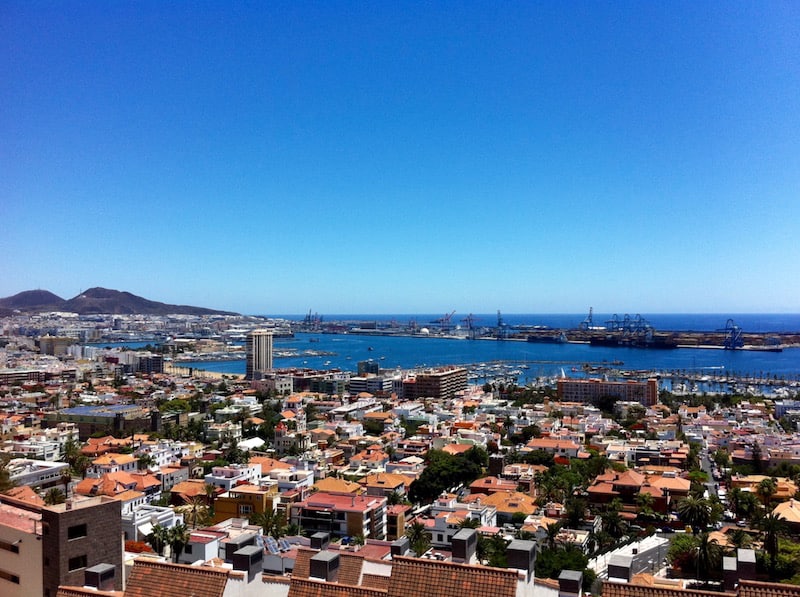 Considered one of the most beautiful urban beaches in the world, Las Canteras Beach is where the city’s residents prefer to enjoy their free time, since they can sunbathe, swim in the sea, walk along the avenue or drink something in the numerous restaurants and terraces.

Our site uses cookies to give you the very best experience. Continued use of our site tells us that you're agreeing to the way we use cookies. Read more about cookie usage here..Ok Seguir leyendo | Read more

This website uses cookies to improve your experience while you navigate through the website. Out of these, the cookies that are categorized as necessary are stored on your browser as they are essential for the working of basic functionalities of the website. We also use third-party cookies that help us analyze and understand how you use this website. These cookies will be stored in your browser only with your consent. You also have the option to opt-out of these cookies. But opting out of some of these cookies may affect your browsing experience.
Necessary Always Enabled
Necessary cookies are absolutely essential for the website to function properly. This category only includes cookies that ensures basic functionalities and security features of the website. These cookies do not store any personal information.
Non-necessary
Any cookies that may not be particularly necessary for the website to function and is used specifically to collect user personal data via analytics, ads, other embedded contents are termed as non-necessary cookies. It is mandatory to procure user consent prior to running these cookies on your website.
SAVE & ACCEPT